I Am My Brother's Keeper

Previous Next View All 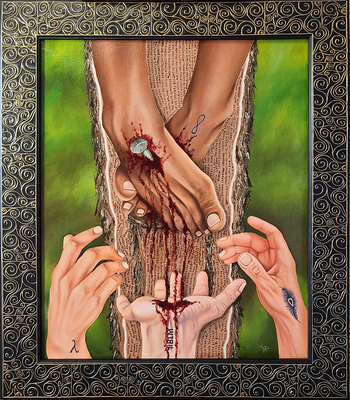 This painting was particularly unusual for me as no real planning went into its’ creation. It came about in passing thoughts each step of the way. I started with a quick sketch in my sketchbook and let it go at that. I proceeded not knowing more than what I had completed at any given moment, not intentionally placing any meaning behind what would eventually become this painting.

At the time these sketches were not really related in any way. I was just sketching things that came to my mind in my sketchbook. Then one night, BOOM, I had to grab a canvas and put something down quickly and it was closely related to my preliminary sketch. I still didn’t know where this was going, I just had an inner need to put my sketch down on the canvas and I could refine it later.

Once I drew something on canvas with my charcoal pencil, I thought I may call it “At the Foot of the Cross“. Inwardly I knew that title wasn’t right as it was not to be anything ‘religious’, but to what, I had no idea.

I researched at this point for proper composition on the hands and feet and made a few adjustments. I knew this was not going to be a classical religious theme.

I posted the drawn canvas on Facebook just to get others’ thoughts and I wasn’t surprised by people’s reaction to thinking it was something religious or “higher” than our human realm. I knew it wasn’t what they were thinking, but yet, it was truly something more than I even thought it was to become.


I painted the feet and knew it had to be of African descent or even Arabian. Just as I was completing that portion and as I was starting on the hands, I knew instinctively that each figure must represent a color of all the human races. Each had to represent a race from mankind. Mankind can be divided into 5 races, “Aethiopian or Black”, “Caucasian or White”, “Mongolian or Yellow”, “American or Red”, and “Malayan or Brown”.

Therefore, the feet are of the Black and Brown races, the hand in the middle bottom is Caucasian or White races; the hand on the right is of Red races and the one on the left is of Yellow races.

At this point, I thought the title should be “Am I My Brother’s Keeper“. I thought it apropos as it represents the human race. This title implies that you cannot be unconcerned about what happens around you to other people because sooner or later, you will be directly impacted by those that you choose to ignore. In the Christian biblical tale, Cain was basically saying, “My brother is not my problem. It doesn’t affect me directly so I don’t care.” Even though he was directly aware or even indirectly, the cause of his brother’s death. It was then it hit me one evening… this will be titled “I Am” not “Am I”. “I Am My Brother’s Keeper” as I rushed to my studio and wrote down the title.

When the initial colors of all humanity were represented, it still had to be bigger than that. There were times that I was relaxing not sure where this painting was taking me and all of a sudden I was driven to my studio with thoughts that I must paint. It was during this time that I realized I had to represent those who are being marginalized and brutalized by humanity. That is where the tattoos came into being on each race of mankind.

The tattoo on the foot is an Infinity Symbol representing not only eternity but also that this hate and brutality have always existed. It also represents the reminder that “We Are All Our Brother’s Keeper.” The tattoo on the left, a Lambda Symbol, is for the LGBTQ Community; the center tattoo is obviously for BLM and people of color and the tattoo on the right is for our Native Americans.

It was also about this time, as I was pondering how to paint the cut bark that I instinctively thought about finding individual names who were directly impacted by the inhumanity of mankind. I had to include on the bark the names of those who have been murdered just because of who they love, or because of the careless disregard of those because of their skin color and for the continued brutality of Native Americans, who to this day and since the founding of this country have been marginalized and murdered. Each hand points to the individual names on the bark. Also, besides the individual names reflected in the bark, are the mass shootings whose skin color, gender, sexuality, and nationality know no boundaries.

So I bring to you the final result, “I Am My Brother’s Keeper“; the painting that came to me in thought, incrementally and without much planning. I hope you take time to reflect on the images and on the names within the bark and why the blood flows into the hands of those we either choose to ignore, out of ignorance, blind bigotry, or misguided perceptions. We are all responsible for each other as one, in this human race on this one planet.

Posters and Prints of my painting are available now. I hope that you will order one not only for yourself but also for your Church or Social Office as well. Help bring awareness that We Are All Our Brother’s Keepers. Order Now for prints, posters, and more.